Gionee Mobile, a leading smartphone manufacturer in China, is known for its impetus on excellence in R&D, which results in high quality smartphones. Gionee was set to bring its latest flagship device, called the Gionee Elife E7 to India. The device was a successor to the Gionee Elife E6, which had given the Indian market an early flavor of how Gionee was divergent from an already vastly populated market in the personal electronics space. Billed as the best Camera Android smartphone, the E7 launch created boom unlike any other smartphone launch, with several calling it, “biggest and grandest launch of any consumer tech product in India”. The device features a 16 MP rear camera with the largest pixel size in its class, aptly hosting a moniker of, ‘Made for Shooting’.

After the successful launch of the Gionee Elife E6, which marked the introduction of Gionee as a brand in the Indian market, Gionee wanted to bring a delight to the market with the Elife E7. With the Elife E7, Gionee aimed at strengthening its bonds with the customers and building an immersive experience that would enhance the reach as well as visibility of the brand in the market. Owing to the premium nature of the product, our task, as a leading digital consulting company in India, was to build the reach while providing an experience to delight the target audience ensuring rich brand building and top of the mind recall using paid media.

Our target audience during the campaign was Section A+, A, B+ above the age group of 25 years. We equally targeted males and females during the campaign. The reason for targeting this section was obvious, given the premium price of the device and the paying power of this segment.

We decided to divide the whole campaign based on the launch to create individual strategies in order to generate maximum ROI and visibility. The campaign was divided into a launch phase and a sustenance phase. The launch phase lasted for one week, within which the device was launched into the market. This phase saw us selecting high impact properties with portals like MSN, Yahoo, Youtube, Facebook, Twitter and The Times of India being used judiciously. In the sustenance phase, on the other hand, the idea was to burn the fuel gradually in order to keep the fire burning. We drove the traffic to the new microsite/ landing page that we tastefully designed in order to give a wholesome experience and information about the device.

We used rich and exclusive branded content Gionee which clearly showcased the idiosyncratic features of the new device, such as its camera prowess, fast processor and HD display along with a strong message of #MadeForShooting in the visually attesting ad banners which were served on desktop and mobile. We embedded the hashtag on the ad copies to ensure recognition and channelization of conversation, which were aggressively being encouraged across the social media platforms from the brand profiles. The hashtag gave a strong identity to the entire campaign and over a period of sustained push, people started to recognize the device with the hashtag alone.

We tastefully designed several ad banners rich in media content, all tailor made for the various sizes across the portals we had before hand selected in order to drive traffic to the brand page which was a host to critical product information and plush pictures.

Dedicated best performing portals for both the campaign legs were picked, keeping in mind the climate of winters, enthusiasm around Formula One racing, (since the launch was at the BIC in Greater Noida), excitement around sports and bollywood and buzz round social media and e-commerce. These portals were shortlisted and picked to host the ad banners in order to give a large section of audience a rich, satisfying and wholesome brand engaging experience. The major portals and their performances were:

For the Launch Phase: MSN: We took over the entire homepage for 12 hours just before the launch of the device on MSN. The supertakeover involved taking over all the ad units including the sidebar, top bar as well as in content unit. MSN performed exceptionally and we were able to garner more than 88,51,720 impressions which was 47% more than the industry standard. The campaign flew with a CTR of .23%, almost 8 folds the benchmark score.

Yahoo: We intelligently used the high impact properties of Yahoo with a full homepage takeover as well as a billboard branding at the login page for 24 hours. The portal was an exceptional driver for reach and visibility as we were able to extract 56,22,426 impressions, almost 13% beyond expectations. The embedded Rich Media video playback of the E7 pre-tvc roll was very well received too. Burrp, a Network 18 owned portal, most famous for searching quick food joints and lifestyle venues across NCR was one of the star performers of the show. It delivered a total of 8,510 clicks, which exceeded the average estimation by more than 325%. Multiple dynamic and static ad units were used on the Airtel Dongle login page. The property repaid us with more than 8,00,181 impressions, which were once again more than the average of what we were expecting. It was very important that the portal performed well, given the direct streamlined telecom based audience that we were targeting via the portal. With a CTR of 2.13%, we were really pleased with the performance. 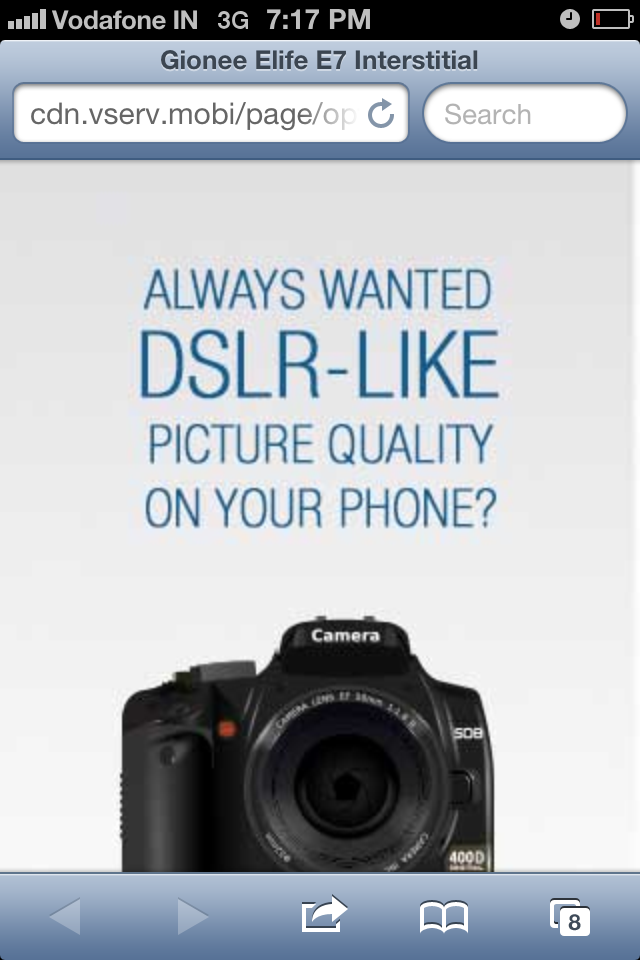 We served high quality dynamic, rich HTML 5 full screen banners via VServ. The banners very clearly communicated the USP of the device and how it possesses the potential to replace your full-featured DSLR camera. With engaging content and thoughtful creativity on display, the 5 day campaign saw 31,725 clicks. Since these banners were served only on mobile, it was a direct engagement with our niched target audience and one of the vital cogs in our engagement wheel and over delivered by 105%. Several ad units on Economic Times were used to leverage high visibility of the portal. We leveraged ROS as well as the Homepage of ET in the order to build engagement. The dynamic banner when clicked opened up and played the TVC video, giving a peek into the world of the Elife E7. ET in total produced 44,88,897 impressions and was one of the outstanding performers. We used Affinity’s platform for contextual targeting. The ads were expandable and in text RON. Several ad sizes were used and we leveraged platforms such as TOI using it. Our campaign on Affinity boasted a CTR of 3.04% from the 8,15,348 impressions.

How Citibank and its 24 E-Com partners took to Social Media to engage with the audience, educate them about the…