How Citibank and its 24 E-Com partners took to Social Media to engage with the audience, educate them about the various offers during the largest Cyber Sale in India, and encouraged them to cash in the on the unique opportunity presented to them with OMG Sale. 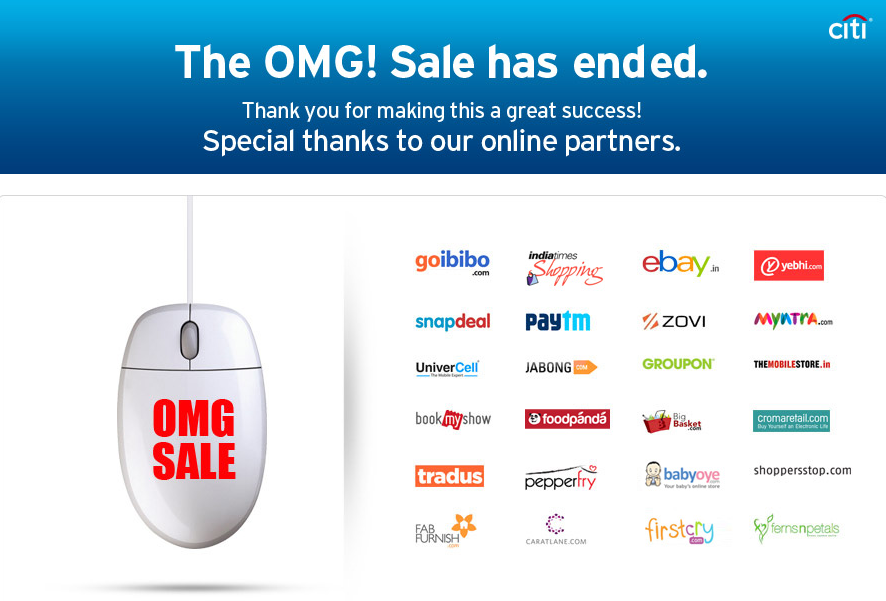 #OMGSale 2013 was the next iteration in the series of Online Mega Sales powered by Citibank, building upon the success of Oh My God or OMG Sale v1.0 in year 2012. The Sale was billed to be as the biggest Online Sale and was held on December 4th and 5th. It involved 24 E-Com partners coming under one umbrella, each offering attractive deals during the days when the Sale was Live. After the success of the OMG campaign in 2012, the entire focus of the campaign was to better the numbers, not just in terms of social media engagements but also sales figures during the period. We planned to use various Social media channels such as Twitter, Facebook as well as Instagram to communicate with our audience. To start the activity off, from December 1 we built upon the mandate of, “Stop Shopping as the biggest Online Sale is around the corner”.

After educating the audience that the Sale is around the corner, we changed the communication strategically to “Shop Now” on the days the Sale was live, which was on December 4th and 5th. Handsome rewards were promised across Social Media for enhanced engagement, while we also made sure to tell the audience about the various offers from each partners in the form of creative tweets. Exhaustive Twitter strategies, including the questions, pre-buzz, post-buzz were designed individually for all the 24 partners so they could engage with their followers too. Not just this, we also partnered with 5 premier Indian blogs for a unique giveaway, where users had to follow us on our Social Profiles and answer simple questions around Cyber Sale season. OMG Sale was a unique initiative, which bought under one roof, well over 25 Twitter accounts ranging from the E-Com partners of OMG Sale to the Radio partners. Individual strategies for all the partners was designed keeping in mind, products on sale at the respective sites as well as the kind of brand communication they adhere to or follow based on the brand target. Not just the partners, but individual tech blogs ran a Twitter contest too from their respective handles as OMG aimed to take over the Twitter world for the five days that activity was live. A social media jury of five members was setup that evaluated all the entries received on all the platforms where the activity was conducted and the hands on nature of the jury to keep announcing winners every couple of hours was something we were extremely proud of. More than 100 vouchers each of Rs 500 from BMS were given away over the 5 days as well as a grand voucher of Rs 5000 from Yebhi. 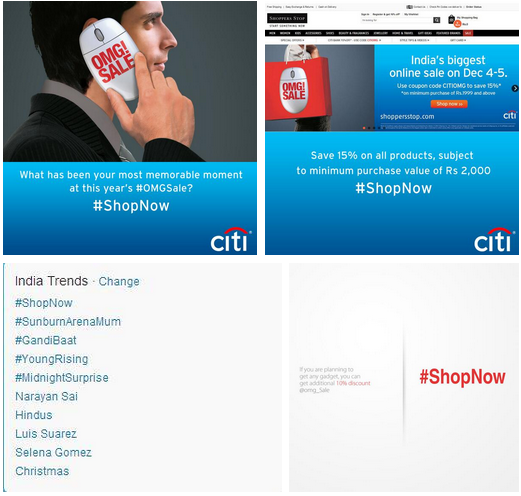 The creative used on twitter were in-sync with the offline communication of the brand and designed to keep communication flowing over the period of five days making sure the engagement levels did not drop once. Usage of two different hashtags over the two days, #OMGSale initially and then #ShopNow alongside different types of questions ranging from guess the object from jumbled images to open ended opiniated, was also an interesting move as we endeavored to keep the audience interested in the activity. OMG Sale started on the morning of December 1st, 2013 with prebuzz on twitter. The Twitter profile was done up with creative keeping in line with the overall communication of “Stop Shopping”. For the three days till December 3rd, 2014, we ran the activity from 9 AM to 6 PM promising to reward the 10 most interesting tweeters every 2 hours. Given that a winner could win again in the next slot, if he continued to participate with relevant answers, made sure we kept our audience on board despite declaring winners in real time while the contest was on. At the end of the day, the most interesting participant was given away a Mega prize of Rs 5,000 Voucher from Yebhi as selected by the jury of Social Media experts. While the activity was being executed on twitter, various activities were being executed in parallel. The multiple partners of OMG Sale conducted activities on their Twitter handle in sync with ours, while Citibank also took to their Facebook page to ask one question everyday, whose answers were evaluated by the same jury, and winners declared the next day. The audience was encouraged to post images of their shopping from OMG Sale on Instagram too, and we rewarded the most interesting posts there too. On the two days of the sale, the entire activity was a lot more aggressive. More partners joined in including Social Media influencers and Tech Blogs who ran the OMG Contest from their personal handles too. We also decided to go in with a generic hashtag #ShopNow to engage mass audience into the lure of shopping online. Five tech blogs including Shoutmeloud, Gadgetstouse, Mobigyaan, Android Advices and TelecomTalk hosted OMG giveaways, giving away 3 vouchers of Rs 5000 each from Yebhi. This way we were able to bring the dedicated audience on the blogs over to our Twitter handle and engage with them in the activity going on. As we had set out for, OMGSale 2013 broke the records and numbers of OMGSale 2012 handsomely. We received well over 27,500 tweets over the period of five days and trended across India for a total of 63 hours combined on the 5 days. We received over 1,100 unique entries on the five blogs where the activity ran.

From a sales perspective too, OMG Sale was a massive win and a large credit of the same was given to Social Media activity by Sridhar Iyer, Head, Digital Business, Citi India who said that, Citibank card spends during the OMG! Sale 2.0 was 8.4 times that of the average daily spends across the 24 merchant partners. There was 71 per cent increase in average daily sales over last year’s OMG! Sale. The brand was trending on Twitter over five days as against three hours in OMG! Sale 1.0”. You can click on the link above for more on OMG by Mr Sridhar.

It is fair to say that OMG Sale v2.0 was a grand success, easily eclipsing the numbers on Social Media when compared to OMG v1.0, which was a big target. Undoubtedly, the participation was bigger, more influential and whole, all of which reflected clearly in soaring sales figures.

How Citibank took charge of the celebration of festivities in the digital world, laying foundations to the stage where it…

Campaign Background: Gionee Mobile, a leading smartphone manufacturer in China, is known for its impetus on excellence in R&D, which…