Time Period of the Campaign: With the education sector flooding with numerous institutes, NIIT needed to stamp their authority as a leader in providing IT based courses post the high school and propagate their Cloud Campus. During this period, Viswanathan Anand, who has been the face of NIIT for several years was playing Magnus Carlsen of Norway in the World Chess Championship in India (Chennai), for the first time, making this a historical occasion for Chess as a sport in India and thus presenting a huge opportunity for NIIT to reiterate their stand as a symbol of excellence in education. An association with Vishy via the #Wish4Vishy campaign, who is synonymous with the game of Chess in India, not only consolidated the brand personality of being intelligent, for the youth and smart but also gave the game of Chess a massive uplift on Social Media in a country largely dominated by game of cricket. The ultimate challenge was to leverage Social Media and generate a wave of patriotism and feeling of togetherness as a Nation around the game of chess and at the same time generate potential leads for NIIT Cloud campus. We decided to draw organic traffic to the microsite that we created at www.wish4vishy.com by leveraging social media channels and collected wishes for Viswanathan Anand as he faced Carlsen. In the process of the same we were able to generate leads for the NIIT Cloud Campus from the microsite created. Since FMWC 2014 was the biggest Chess event in India, a feeling of patriotism was evoked with the right content strategy and carefully directed communication not just at the Social Media audience but also to engage celebrities like Rajdeep Sardesai and Suhel Seth for a greater reach on platforms such as Twitter and Instagram. We also made a conscious effort to engage with various Chess communities across Twitter especially, in order to bring light to the game of Chess and cover the matches live both on Social Media and our Website. A website which integrated all the various Social Channels and their entries was designed with Vishy very much at the heart of the design waving to the audience giving it a bright and cheerful look. Not only did the site captured the wishes of the visitors but also prompted them to check mark if they were interested in knowing about the Cloud Campus Course so the NIIT Team can personally speak to them about it. The leads captured were monitored in the LMS making sure any spam was deleted. We carefully structured our creatives to encompass interesting facts about Vishy, about the game of Chess, mind tickling puzzles etc as well as encouraged the readers to visit the micro site in order to send their wishes. There were a couple of short quizzes conducted on Twitter as well as we got people to talk about Vishy and chess. We also took to grounds for our audience offline to create emotionally connecting videos with people wishing Anand all the luck and success as well as speaking about what Chess as a game means to them.  We tailored our communication based on the live situation of the tournament, shifting to a positive subject like sportsman spirit and still backing Anand by highlighting his past achievements when towards the end when defeat was in sight. We interacted as NIIT with some of the grandmasters active on Twitter and got them to speak their opinion on Vishy and on some of their past favorite moments of him (if any) generating a lot of buzz around the initiative by NIIT. Offline activities such as Press and Media interactions, Media releases were covered across the various Social media platforms and website regularly. The microsite was made live about a month before the match to generate momentum and buzz by the time the tournament came around. We used various Social Media Channels such as Twitter, Vine, Instagram, Facebook and Youtube to get our message across to the audience and interact with them. All the entries coming from the audience included a hashtag #Wish4Vishy so the communication could easily be monitored and analysed which gave us a headstart into what the sentiments were of the audience, for example, we realised there was an amazing response on mind tickling puzzles and content that was around Anand’s personal life and achievement, and went on to push those more. All of this traffic from Social Media platform was directed to the microsite as the URL of the same was one of the highlighting features of the message across the platforms. Dedicated banners were designed for all the platforms with hashtag integrated so that course of communication was always very clear to the users. 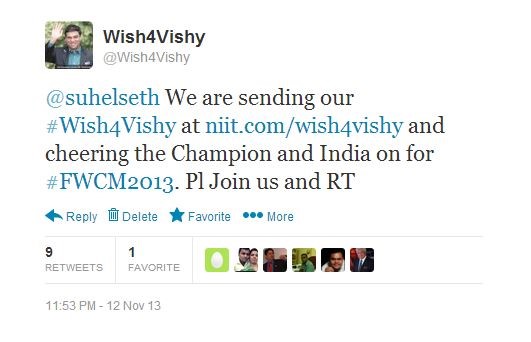 Regular updates on Facebook and Twitter with pre defined content pillars as well as the live situation of the match were sent out so to keep the page as engaging as possible. Over on twitter we spoke to the audience by asking them their predictions of the matches as well as at time asking them to prompt the next move of Anand hence involving them live. We also updated the website regularly posting the match summary, pictures as well as detailed scorecards. We had collaborated with NIIT for highlight videos from the chess match too which were uploaded and shared so that those who missed out on the match could catch up.

Since videos are always the best way to deliver the message we created rough scripts of the videos which were around the audience wishing Vishy the best, their time playing Chess or any other story they might have with NIIT or Chess. We rehearsed with the speakers so that they were comfortable on camera making the presentation look natural and shared the videos as emotionally bonding content across the profiles. We also participated in the chatter builder on Twitter so that even people like the official commentators knew about the initiative and they actually, read few of our tweets on the broadcast. Every match was live tweeted, moves were analysed and plenty of conversations built around Chess, Anand and spirit of the game.

The campaign was the first of its kind giving chess  as a sport, exposure to the digital world hence making it one of the most talked about topic on Social Media during FMWC. #Wish4Vishy was a success of epic proportions and earned a name in, “Top 24 Coolest campaigns of the year 2013“ as reported by Lighthouseinsights. Plenty of people participated in the campaign organically purely sensing the buzz which was a huge win for us. The NIIT Facebook fan page gained over 3460 fans in the period of one month when the campaign was executed, without any sort of media push. More than 1417 wishes were received on the microsite while 277 followers on twitter were added and over 4.8 Million impressions generated organically. A total of 8,604 visitors visited the microsite in about a month’s time which helped us generate 261 leads, absolutely organically without any media spend.

Although the results of the championships did not go in India’s favor with Viswanathan Anand not winning a single game, the spirit of sportsmanship and brotherhood eventually won through with the fans applauded Magnus Carlsen over his triumph and still stood strong and proud behind Vishy Anand who has given them plenty to smile about in the years gone by.

With the penetration of the Internet at an all time high, MTS wanted to create a tremendous wave of excitement…