’This moment calls for a Selfie’: The rise of the Selfie Culture - #ARM Worldwide

’This moment calls for a Selfie’: The rise of the Selfie Culture 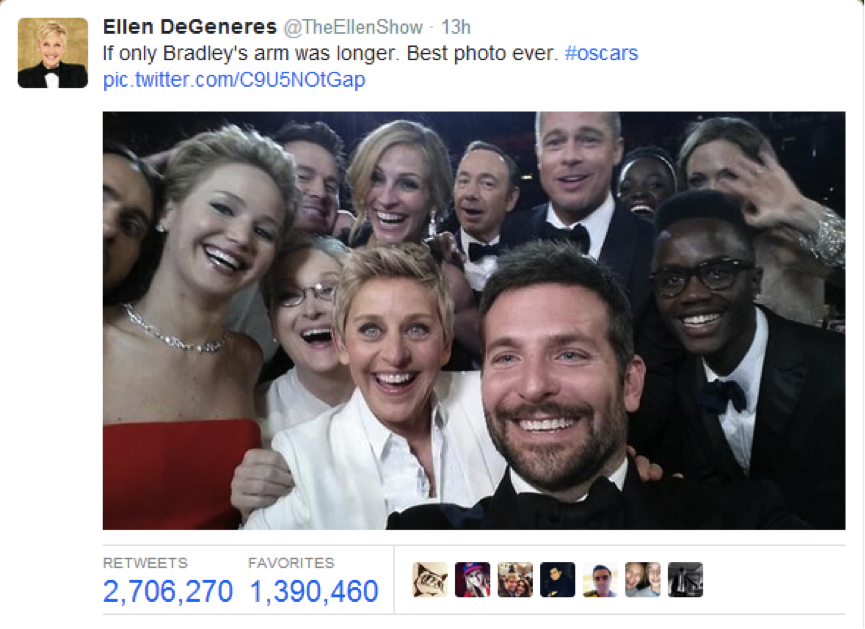 Look around yourself, we guarantee that everyday, you will at least catch a bunch of people taking a picture of themselves with camera on their smartphones. In fact, it has become such a popular sight, that we have started calling it, the ‘selfie culture’. Used with permission of Natalia Fracesca Sinatra and Davide Giavazzi

The world is basically now, divided into two, you have people who are in love with the whole selfie thing, and the others, who totally ridicule it. Fact is, you cannot ignore it, like it or not like it. Selfies, have been at the heart of the latest technological developments in the world of mobile. Devices such as the HTC One (M8), Oppo N1, Gionee E7 are all examples of devices that are made keeping the selfie trend in mind. In fact, for the very first time, HTC named the front facing camera on the M8, the Selfie Camera, and featured a front camera, which had higher mega pixels than the rear camera.

Origin of the Selfie Culture

The whole Selfie culture is not something recent. According to Wikipedia, we must go back all the way back to early 1900s for the advent of the Selfie world, “The debut of the portable Kodak Brownie box camera in 1900 led to photographic self-portraiture becoming a more widespread technique. The method was usually by mirror and stabilizing the camera either on a nearby object or on a tripod while framing via a viewfinder at the top of the box” The popularity of the term Selfie is attributed to the rise of Social Networking websites. It was around 2005 and with Myspace that Selfie started gaining popularity. From 2006 to 2009 when Facebook gained popularity, that is when Selfies became the real hip thing. Devices such as the iPhone 4 and HTC Desire HD were some of the first to bring about good front facing Camera which helped fuel the fire. Apps such as Itismee, Instagram and social networks like Twitter have been equally responsible for propagating the selfie culture and taking it to viral levels. By the end of 2012, The Time Magazine had intact named Selfie as one of the “Top Ten Buzzwords of the year. By 2013, the word was inducted in the Online version of  the Oxford dictionary giving a measure of its widespread use and popularity.  The word eventually ended up being named the Word of the Year 2013. So how exactly is the word Selfie defined,  according to Oxford,  “a photograph that one has taken of oneself, typically one taken with a smartphone or webcam and uploaded to a social media website.”

Some Quick Studies around Selfies

We love asking people questions and college batches are always some of the most enthusiastic places to conduct a quick poll or a survey. So, we took to a class of about 50 students in one of the premier institutes of India to ask them about selfies. Out of 50, 43 students agreed to have taken a picture of either themselves or their group using their smartphones. Of these 43, 40 of them told us that they had shared selfies across their Social profiles and they were not shy of it. However, only 31 of these 50 students, actually used the word Selfie in their everyday life. So, knowingly or unknowingly, everybody is taking selfies. In this case, a whopping 86% of the class had taken a selfie. And, it is owing to data points like these that you actually start to understand why selfies are the next big deal. According to another study done by Wired, women are more likely to take selfies as compared to males. In Moscow for example, at least, women take 80% of selfies. However, there is another interesting fact to this story, that after the age of 40, men are more likely to post a selfie on Instagram than women. Tilted head seems to be the most popular pose in a selfie, in fact, women in USA on an average tilt their heads by 11 degrees while in Sao Paulo, women tilt heads at about 16.9 degrees. Above are some of the results from the same study when they evaluated about 3200 selfies posted on instagram. It indeed does make for an interesting data reading. We quickly went over to instagram to check the trends of the selfies, and check out the number of images that are tagged with selfie or other tags pertaining to it, the raw data is just gob smacking.

According to an infographic published at Stylecaster, more than a million selfies are taken every single day. Facebook and text messages seem to be the most popular destinations for these selfies while those in between the age of 18 and 24 take 30% of the selfies, safe to say, selfies is a thing for the young ones. Australia, USA and Canada in that order are the most popular countries when it comes to selfies in terms of demographic location.

Selfies are a part of Big Marketing Strategies today

Who would have thought that that taking pictures of yourself would become a central part of the story of some of the most popular marketing campaigns in the recent past. However, that is exactly what has been the case. Not just lifestyle brands, but big brands in the world of technology such as HTC with their ‘Movember’ movement have encouraged their audience to share selfies across their social networks. Here is a quick brief at some of the campaigns that involved selfies that have set new industrial benchmarks: What’s the one thing man loves more than himself? His pet would be a good guess. This is what Purina, a well known Pet Help company did. They set up iPads which captured selfies of the pets that walked into their stores, and then tweeted them. In fact they set up a whole page that was educated on how to take good pictures of your pets, which can be checked out here. The campaign was a rousing success and also bought Purina plenty of customers because they wanted to be a part of the whole exercise for the love of their pets, this gave Purina a great chance to make a good impression and eventually convert these visitors into regular customers. One of the best known tech magazines of the world, called the Wired Magazine took to the Selfie culture when it invited the readers to download the Wired Application, replaces the existing cover image with their selfie and then share it across the Social platforms with the hashtag #wiredgoesviral. Wired promised to actually use the best selfie from the received entries and feature it on their cover. A quick Twitter search and you actually come across some very interesting images that were in contention to be on the cover page of the February issue. As expected the campaign was a massive success.

3) #NomakeupSelfie for fundraising for Cancer What better way to go viral than by doing good service to society. This is exactly what #NomakeupSelfie is all about. The campaign that originated in Britain gradually moved over to Canada where women posted their selfies without any makeup as they attempted to raise funds for fighting cancer. The whole idea behind the campaign was to text FIGHT to 45678 to donate $5 towards the cause, and you showed your support for the same by posting a selfie. According to a report, the campaign has already generated more than 2 Million Pounds for the cause with more than 83,000 mentions on Twitter in barely two days and over 51,000 posts on Instagram, estimating 180,000 Pounds from just these two sites. Since we are on the topic of Selfies being used for the good of society, how can one ignore what NASA are doing recently for Earth Day? People from all over the world are encouraged to click their selfies with their environment in their background in a move to spread awareness about the growing problem of pollution, deforestation and global warming. A blue marble will then be released, which is basically a mosaic of all those images put in a neat collage. All the images that are submitted via Social network have to have the hashtag #GlobalSelfie. NASA also released some quick notes which encouraged users to do their bits for environment such as plant saplings, recycle, clean litter etc.

Not just the brands, the celebs are doing it too

Big marketing spends are being used not just in designing and executing campaigns around selfies, but also bringing big stars and influencers on board who can then with their reach propagate the brand message.

We recently saw the Ellen tweet at the Oscars which brooke through all the records of Twitter held previously, including the most Re-Tweeted Tweet as well as President Obama taking a quick selfie cheering on the Boston Red Sox for the World Series Championships. With some of the most recognised faces on the planet in the game, you can be sure plenty more will jump on the wagon. Group selfies, we do predict will be the next big thing, and if you haven’t noticed already, pretty much, no event is complete without a group selfie being taken. In fact, in our two most recent experiences this claim was validated. At the GUILD and GIMA awards, where one of our clients was the name sponsor, selfies with big film stars was the in thing. Not just us, but just about everyone on the arena cued up for a selfie, here in the picture is Shahid Kapoor taking a selfie on the new Gionee E7. 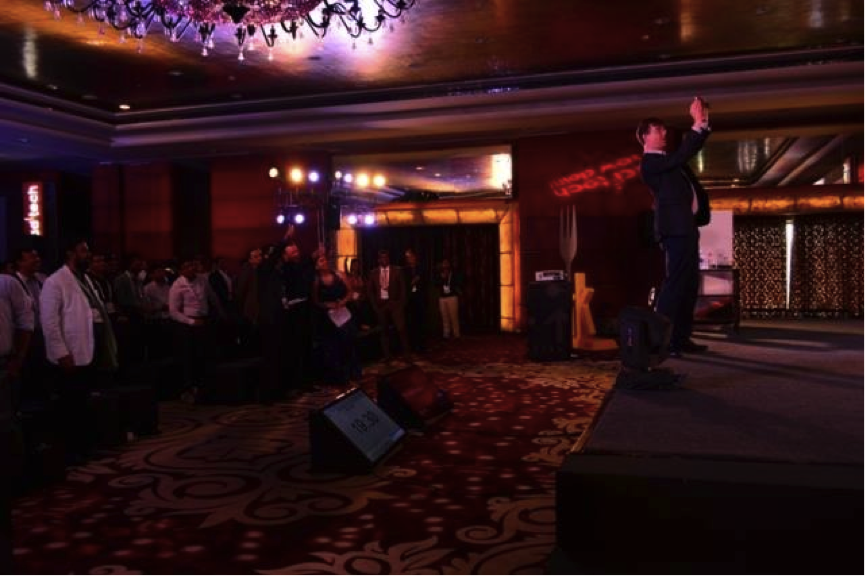 If you thought it was just an Indian thing, then definitely you are mistaken. At Ad:Tech 2014, the VP for strategy at BBC Worldwide, Mr Tom Bowman clicked a selfie with the audience before he began his talk. A sweet, little Oscar like moment for the biggest digital summit in India.

Where does this leave us, or rather what is the future of Selfies?

One thing is clear, that there is a selfie boom. It may divide opinions, but it is an attention grabber for sure. But for how long that is a question? Just like any other boom or trend, no doubt the fire in the armor of selfies will die out. In the digital world, usually the shelf life of a trend is short as we soon will climb up to the next trend. However, seeing as most of the mobile makers are realizing the potential of the trend, it is an educated guess that selfies are here to stay for a good while. Humans will not stop taking pictures of themselves to share it, so no doubt there will always be space for the next big selfie campaign. So how best can you use it for? It would be foolish and obvious to state that it is imperative to design a campaign around selfies to help you leverage your brand’s true potential. Would it be  like being just another one in the line? Absolutely. Hence, what the game changer will be if you can come up with differentiators in the world of selfies. Since selfies are all about capturing the human expression, it is most important to build the right story for the campaign to be a hit. Once you are sure of what emotion you need to capture, a selfie campaign is perhaps one of the best way to connect your brand to the heart of your customer. Are you already thinking about your next selfie campaign, cause we surely are!

And while you put the thinking caps on, here is perhaps the most popular pop music star of India, Yo Yo Honey Singh, showing, why exactly selfies are the new in thing:

Samsung in the recent years has been the global leader in mobile technology. At MWC 2014, they proudly announced that…