It is always a challenging week when you are back to work after a vacation thanks to the festivities, and add in the setting of winters and a rather pleasant temperature range, and you could perhaps make a case for being a bit slow. But thanks to the spacious energy around in the office, which lets be honest, you would expect at one of the fastest growing digital consulting companies, the week has absolutely flown by, with just about everyone happy to be back and doing what we love to do and that is juggling our minds and contributing to the digital convergence around us.

And since its Friday, its time to take you on a spin around everything noteworthy that transpired in the evolving world of digital media and marketing. As always, we will keep the reports very short and add the corresponding link for you to read more on the subject, if you wish to. After Hugo Barra and Vic Gundotra recently, another popular face has decided to call it quits on his time at Google. The Android co-creator, Andy Rubin has left Google, according to TWSJ. It is reported that Ruben’s next venture is to open an incubator to support hardware startups. Lary Page, the current Chief Executive stated, “I want to wish Andy all the best with what’s next. With Android he created something truly remarkable — with a billion plus happy users. Thank you” 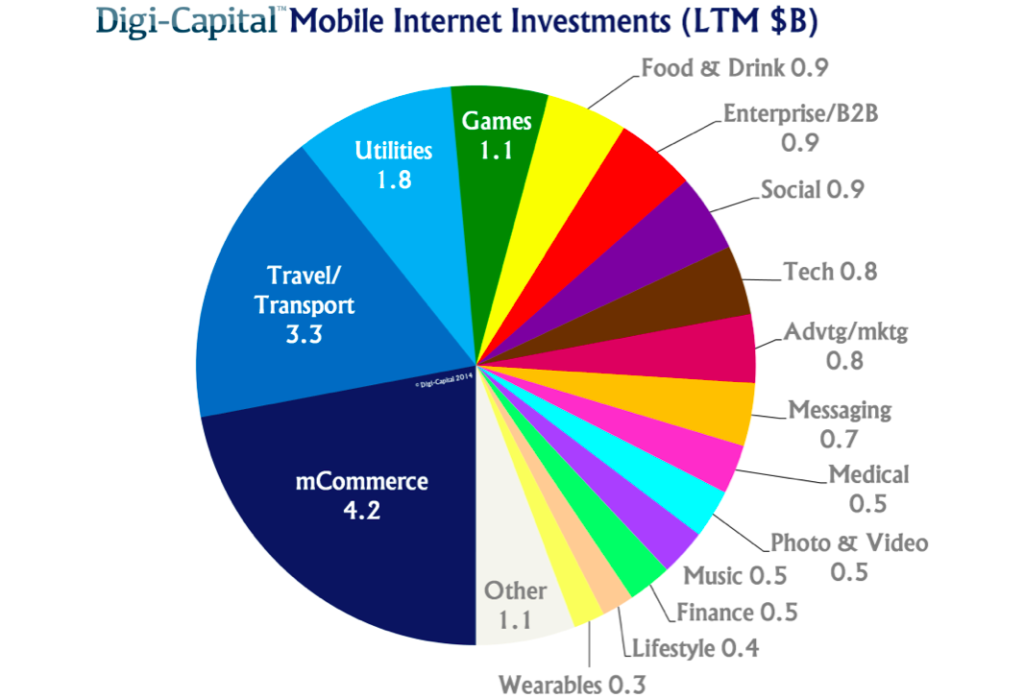 If you ever needed a stat to be sure that the world is going mobile, a study conducted by Digi-Capital has recorded that investment in mobile internet companies has exceeded $19.2 billion. Mobile commerce alone has accounted for more than $4.2 billion, an absolutely staggering stat. Travel/ transport players in the mobile space recorded a return of 78% followed by social media at about 45%, making them two of the best performing sectors in mobile investment. The overall picture is shown in the graph above. In its Q3 2014 earning report, Facebook has announced 1.3 billion monthly active users, and 864 million daily active users. Not surprisingly, 703 million users are mobile users among the daily users, up 39% YoY. Facebook also announced an earning of $2.96 billion via Facebook ads, out of which 66% came from mobile campaigns.

After 6 months of testing, Instagram video ads are a go. Instagram has Disney, Activision, Lancome, Banana Republic and CW on board to show 15 second video clips of promotional content. Disney has already got a campaign live where they are promoting Big Hero 6 with the animated stars posing for selfies in the ad. Instagram has gone on record to say that it would be extremely hands on with the brands looking to promote content on the platform so that only fresh content and not rehashed web/ TV content is published. We have linked one of the first Instagram Ads above.

While you are busy thinking trick or treat, Pepsi Max has come up with a hilarious campaign where they used the opportunity to scare moviegoers. The way the campaign worked was that Pepsi Max modified the mirrors in the restrooms of London Odeon Cinemas Using breakthrough facial-tracking technology and augmented-reality software, so that every time a customer went to see the mirror his face was replaced by a clown or an animated figure. Do check out the video above.

Resource Share of the Week: What makes infographic key to sharing information effectively?

Every week, we use this space to share with you a resource that usually is in the form of infographic to leave a data point or two with you. While we all know that infographics are effective ways to communicate numbers or large data sets, what is the science behind the same? In today’s resource share of the week, we have an infographic on why you should concentrate on summing your findings or data points in form of infographics more often:

With that we come to the end of yet another roundup of stories from the digital world, is there anything you feel we have missed out? Do let us know. And we hope you are following us on our social media channels for more such updates and happenings at #ARM Worldwide.

Its the final friday before the festivities kick in and needless to say we are super excited. As you are…

As the winter knocks on the door and mercury dips in Delhi, the number of coffee mugs, while getting bigger…