It has been amazing week. We saw one of the biggest breaking news in technology with Alphabet and Periscope setting a landmark in its quick acquisition of users. While we are a day away from the Independence Day of India, following are the top happenings from this week in digital.

Google has a Dad now, and a new CEO 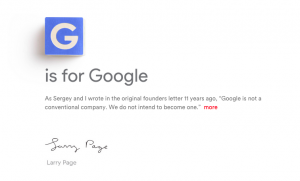 Web products leader Google which fathered companies like Gmail, YouTube and its Ad Division under its shade, now has another company fathering it. Launched this week, Larry Page & Sergey Brin’s new company Alphabet, now owns Google. Long anticipated CEO crown of Google has been transferred to Sundar Pichai. With Pichai as lead, Google will continue serving as the parent company for its consumer services. What goes outside Google and under Alphabet is the complete research-only department, working on various projects like artificial neural networks and a bizzare anti-ageing thing.

The company is also serving paid ads, themed “Find Your Happy (Hour) Place” on Instagram. These ads are targeted towards men between the ages of 21 and 34 years old, making sure the ad is served to their audience above the legal drinking age. Miller is one of the few advertisers on Instagram, but playing more their way through it by exploiting options on the platform.

Amazon retires Product Ads, will replace them with Text Ads

Amazon has decided to retire their Product Ads as of October 31st this year. Product Ads were perhaps the most successful option on Amazon’s advertising platform. Amazon has not clearly stated why are they shutting it down, but they did announce their replacement with Text Ads option. Product Ads enabled advertisers to showcase their listing as ads on Amazon, directing them to their own website/store. From an advertiser standpoint, they offered the best return of investment among all the available options on the platform.

Twitter’s Periscope is just four months old and has already established an industry landmark. Other than its 10 million active users, Periscope released other statistics about the service on their blog. With over 40 years worth of video being watched daily on the platform, Periscope has only seen a upgrowth on their graphs.

Periscope has a plethora of celebrities and brands on board, using it regularly to broadcast micro-moments. It doesn’t need any prediction to say that Periscope will continue growing, as well as will advantage the micro-moment sharing trend set by Snapchat.

We at ARM Worldwide celebrated our 2nd anniversary last weekend, with a lot of changes to our functioning and philosophy.…

Bidding the 2nd weekend of October with an amazing roundup! This week's highlights include Apple Watch's new TVCs, and the…