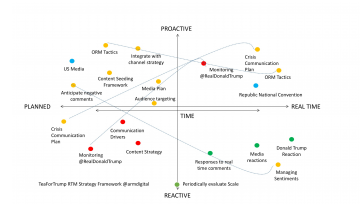 #TeaforTrump campaign started its journey from India to create required noise across the globe. The core of digital campaign execution strategy was real-time marketing, turning our content into liquid content & discoverable over the Internet.

The intention and endeavors behind this campaign was to spread the word about the power of tea. ARM Worldwide’s strength apart from paid media & technology is digital PR & content marketing. For TE-A-Me we focused on reaching out to audiences in India & US, capturing & curating their real-time responses from the global audience and encouraging everyone to join us requesting Donald Trump (@realDonaldTrump) to #drinkthetea.

The recipe behind the perfect execution of this campaign lies in an exact and opportune mix of timing, audience targeting, distribution channels, amplification, seeding, and cross-promotion on multiple platforms.

Velocity is what we wanted to achieve = (views + articles + conversations + impressions) / time. 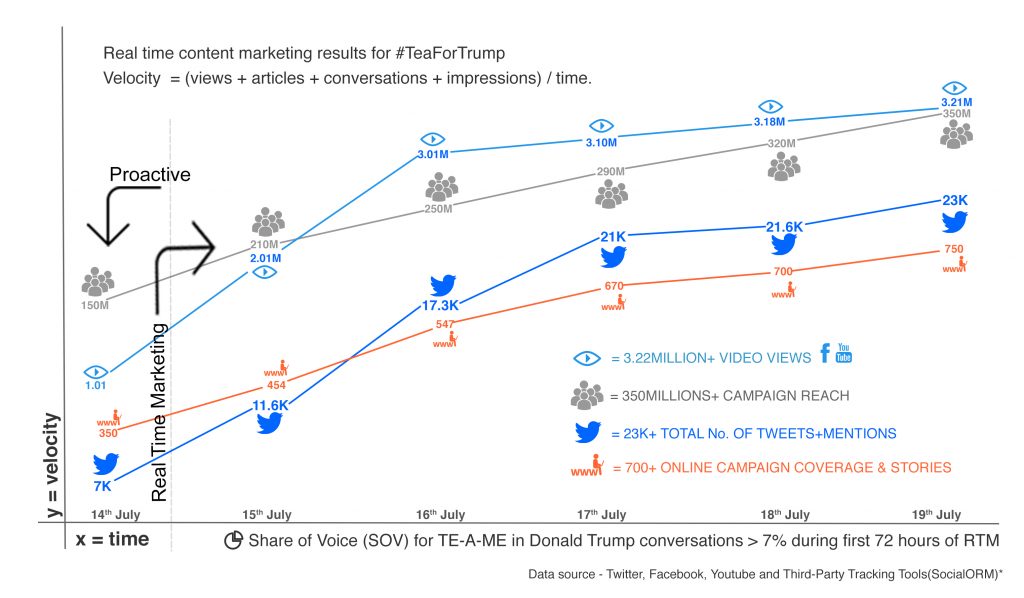 If you are still wondering, this is the Tea for Trump video in which a tea company sends 6000 tea bags to Donald Trump to ‘purify mind’.

As a result of relevant and timely content targeting, hundreds of publications easily discovered the content. In less than 24hrs, we received 1M video views & with organic content marketing activities we achieved more than 3M views in less than three days. Later many internet celebrity figures & NRI’s organically joined the #TeaForTrump revolution on digital.

We also monitored & analyzed more than 200K tweets(all across the word) in our command-center and observed that Share of Voice (SOV) for TE-A-ME in Donald Trump conversations was greater than 7% during first 48hours of RTM which clearly indicate the successful execution of our amplification strategy. Breaking down any Real Time Marketing campaign, we go by the experience and experimentation. Essentially, there are four quadrants to plan, execute and analyze the campaign.  The RTM Framework is more inclined towards the planning stage but also helps for the overall analysis.

The first quadrant is when we list down all those things which we can plan proactively.
#TeaForTrump had many scenarios under this piece.

Sometimes, a robust planning is not enough for an RTM campaign; we need to monitor and adapt accordingly. All the activities need to be Proactively planned but in real time. That is the second quadrant in the RTM framework.

The third quadrant is more about analyzing the possible reactions by the various stakeholders.

Essentially when we execute this framework, there is an ongoing evaluation on the scalability at regular intervals.

The last quadrant is the most complicated and tough thing to execute on a tactical ground.

Time being the most valued factor, with the help of this framework we were able to manage #TeaForTrump on digital and made it a liquid content.

Innovation doesn’t need a license, it needs a leader and we found one as Sumit Shah, executive director, Madhu Jayanti International, the makers of Te-A-Me. He was working closely with us in building the real-time strategy to turn #TeaForTrump into a breakthrough, widespread and interactive campaign, day & night.

Last but not least, #TeaForTrump is not the end of TE-A-ME intervention but the start of #DrinkTheTea initiative for spreading the power of tea. We urge you all to stay tuned.

The doors to TechCrunch Disrupt SF 2016 opened on September 12 at Pier 48 in San Francisco. The three-day conference…