Lessons Which Every Marketer Can Learn From John Cena : INBOUND’17

Lessons Which Every Marketer Can Learn From John Cena 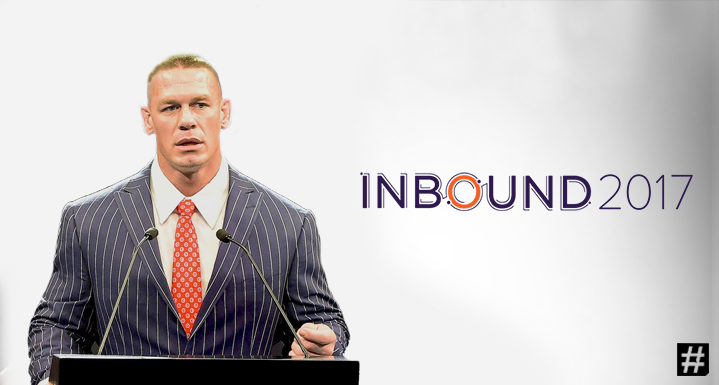 John Cena has gained such popularity and recognition for himself that he needs no introduction. Having carved a space for himself in the world of professional wrestling throughout his career, his other feats include being a successful actor, host and entrepreneur. Having gained massive success as a WWE superstar and an actor, Cena leveraged his position to be a marketing powerhouse and a cultural icon.

Cena has used his privilege and fame for good causes and has actively participated for socially relevant causes that are close to his heart. Here are some of the major initiatives taken up by him :

With his athleticism, charismatic personality, strong work ethic, compassion for social causes and a genuine personality, Cena sets the perfect example for modern day marketers and is perhaps one of the most awaited speakers at INBOUND’17.

Schedule a time to meet with #ARM Worldwide at INBOUND 2017

Here are some awesome reasons that make Cena the ultimate marketing powerhouse, which can reveal some insightful lessons for the marketers:

#1. Invest in Building a Strong Image For Your Brand

Over the years, Cena has emerged as the face of the WWE and has won their championship six times. This catapulted his popularity to unimaginable heights among the masses, and he quickly became the youth and cultural icon he is today. He further pushed his efforts to build a strong brand image by being a part of many notable campaigns and initiatives. He is the part of Crocs’ “Come As You Are” campaign that celebrates the uniqueness of individuals of all ages. He is the voice of “Ernie the Elephant” for Wonderful Pistachios’ biggest advertisement ever, and last year he became the ambassador for Cricket Wireless. His video, “The Unexpected John Cena Prank”, garnered more than 17 million views. These are just some of his ventures in his brand building exercise that has remained immensely popular and have instantly resonated with the audience.

Marketers can take a lot of valuable lessons from Cena to invest in a robust brand building strategy. In today’s online age, where there is already a lot of tussle between brands, marketers execute every creative stunt possible to gain maximum recognition among the masses. In such a situation, it is very important for businesses to invest in a proper branding strategy to gain an instant recall value for their brands in a short period of time, and also build a relationship of trust and affinity with their customers.

#2. Strategic Use of Social Media to Optimize Content Distribution

Apart from his commitment to social causes, Cena is also a social media powerhouse. He has about 44 million fans on Facebook, making him one of the most active athletes from the U.S. on Facebook. His participation in other social media platforms is also just as impressive, with 9.5 followers on Twitter and 6.8 followers on Instagram. That makes him one of the most followed athletes in these channels.

In today’s mobile and content-driven age, almost every business has cashed in on unmatched and result-driven benefits that they receive by having a robust social media presence. Cena strategically uses various social media channels and different content formats such as videos, posts and images to regularly keep his audience updated about his matches, social cause initiatives, or even his life and opinions. Inbound marketers can also leverage their social media strategy to build a strong personality for their brand, and tap into the power of content to keep their audience engaged and build a lasting relationship with them.

#3. Experimenting and Innovating With Your Work Enables Growth

Apart from wrestling, Cena has also devoted his time for many things such as supporting social causes that are close to his heart, making a mark at films by acting in many movies, hosting many shows, experimenting with rapping and much more such eventful activities. Engaging in these diverse activities has only propelled his stardom, and earned him more fans from diverse walks of life.

Marketers can learn a valuable lesson here, and should not hesitate to experiment with their product offers, website design, or any other variable which would lead their business to increase their satisfaction and bring more leads. Innovation is the key to keep growing in any aspect of life, and this holds true for businesses as well. A periodical audit of all the key performance indicators (KPI’s) of your organization is critical to gauge its overall health and improve the variables which are not performing optimally. Conducting experiments such as A/B test with either one variable, or multiple variables, can be incredibly useful to gauge the taste of your audience and what works best for them.

#4. Master the Art of Storytelling

Identifying and building a character for your public image and role-playing it by weaving a story around it to keep your audience engaged is no mean feat, and it has been mastered by Cena. Be it penning his trademark rap “You Can’t See Me”, which has become synonymous with his name, his quotes – the most popular being “Hustle, Loyalty, Respect” – or his different personas as a wrestler in WWE, such as a white rapper known as the “Doctor of Thugonomics”, he has always managed to command attention from his audience by trying to tell his stories through these efforts. This has revealed the different shades of the personality of this wrestler to his audience and enabled him to gain a status of being more than just a star wrestler. In fact, this is the major secret to his success and the reason why he still continues to remain in the mind of the masses even today, more than any other WWE champion.

Like Cena, inbound marketers should realise the importance of the art of storytelling, and hone it to keep their audience engaged and keep coming back for more by having something new to offer each time. The best part of storytelling lies in its versatility, and marketers have the creative freedom to package their content in a manner which can bring the maximum qualified traffic to their websites, or their various other owned channels.

Indeed, Cena is a great inspiration no matter how you look at it. He is a bonafide youth and cultural icon for the masses, and it is praiseworthy how he has been able to maintain it even today. These are some of the key takeaways which inbound marketers can imbibe from the life of Cena, and implement them to make the most out of their inbound strategy and take their business to greater heights.

Meet up with us at Inbound

Our team will be at Inbound and we would love to meet up with you to talk about getting results for your brand or for the brands your agency works with. Schedule a time to meet with #ARM Worldwide at INBOUND 2017 so that we can arrange a time to meet up.

We’re looking forward to an inspiring week and spending time with like-minded people, see you there!

Schedule a time to meet with #ARM Worldwide at INBOUND 2017

Why is Inbound Marketing important for Marketing Management Organizations?

So, are you one of those many people who think Inbound Marketing is yet another buzzword created to confound marketers?…

5 Remarkable Speakers at INBOUND17 You Cannot Afford to Miss

INBOUND is an event which is different from all other conventional inbound or industry events. It aims to celebrate the…