Perhaps the biggest attraction of INBOUND ’17 had to be the wealth of keynote speakers that had attended the event to share their takeaways from the world of inbound marketing. Here’s a detailed look at each keynote speaker and their talking points from the event:

One of the biggest propagators of inbound marketing is HubSpot, and Brian Halligan and Dharmesh Shah opened the show with an absolute bang. Being the co-founders of HubSpot meant that they had a ton of useful insights to share around inbound marketing, including tips on how to scale your business and to utilize effective strategies to get the most out of inbound marketing.

Being the co-founder and executive creative director of Refinery29, it’s evident that Piera Gelardi is a valuable source of gaining creative insights when it comes to the creation and promotion of media and content. 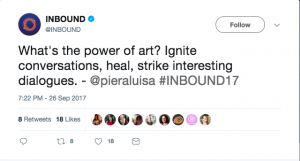 This is exactly what she provided at INBOUND ’17, and those who were lucky enough to attend the event received a bunch of essential insights that will be critical when it comes to promoting their business.

An American scholar, author, and public speaker, who is currently a research professor at the University of Houston Graduate College of Social Work, Casandra Brené Brown was one of the most prominent intellectuals present at the event, whose intelligence was visible during her keynote session at INBOUND ’17.

Event goers received a ton of valuable intellectual advice on how to practice effective marketing techniques, making Brené Brown’s speech one of the most engaging keynote sessions of the event. John spoke about how being a professional not only requires you to have the proper knowledge of your responsibilities but also how identifying the purpose of the brand/organization is vital to play up.

Speaking of celebrity speakers, one simply cannot forget to mention the exciting keynote session of Michelle Obama at the event. The former First Lady of the United States provided a ton of valuable insights when it came to the concept of inbound marketing, providing another new and fresh perspective when it came to this particular theory.

Michelle stressed on the fact that various events, jobs, and responsibilities teach you grace. An epitome of grace herself, Michelle further emphasized that no matter how difficult life, or for that matter a job gets, be graceful and not be afraid.

INBOUND ’17 enjoyed rampant success as one of the most prominent inbound marketing events of the year, and those who attended the event came out with a new and fresh outlook on the world of inbound marketing.

6 CRO Mistakes Every Marketer Should Avoid

If the primary goal of your business is to generate conversions, then it’s ideal that you contemplate the best ways…

The education industry is undergoing a major change, with most of the higher educational institutions and universities leaving their traditional…